On Monday, March 16th, Commonwealth hosted an all advisor conference call with Chief Investment Officer Brad McMillan and Commonwealth Senior Management to discuss the Covid 19 Pandemic.  As usual, Brad offers pragmatic and rational insight to help us understand this rapidly global crisis.  He will be publishing daily blogposts which we will be reprinting on our website blog: The Connected Client.

Yesterday, we talked about the big picture around the coronavirus crisis: the pandemic itself, the likely economic effects, and, last but certainly not least, the market reactions. Next, I want to start a more detailed discussion of each component. We will deal with the pandemic today, the economy tomorrow, and the markets on Friday. Although the big picture provides valuable context, there is also quite a bit to be gained by diving deeper into each component.

Let's start with the virus itself. There’s a real sense out there, among a lot of people, that this virus is basically a judgment or an apocalypse and that we're all going to die as a result. I don’t think so. More important, that is not what the data is saying. As much as they call me Eeyore, I'd like to think I’m a rational Eeyore, and we know a couple of things.

First, the virus started in China, and it got a real foothold there before the government acknowledged the magnitude of the threat. If the virus was going to be uncontrollable anywhere, it would have been in China. In fact, China did bring it under control, as you can see in the chart below, available on the Worldometer website. (All charts in this post come from the appropriate country pages on that site.) 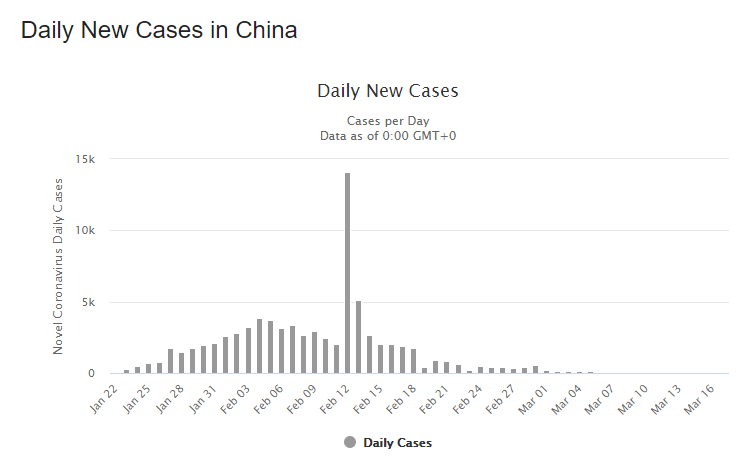 Another good example is South Korea. It had a very bad outbreak, largely because of one super spreader. But as you can see below, South Korea has also brought the virus under control. 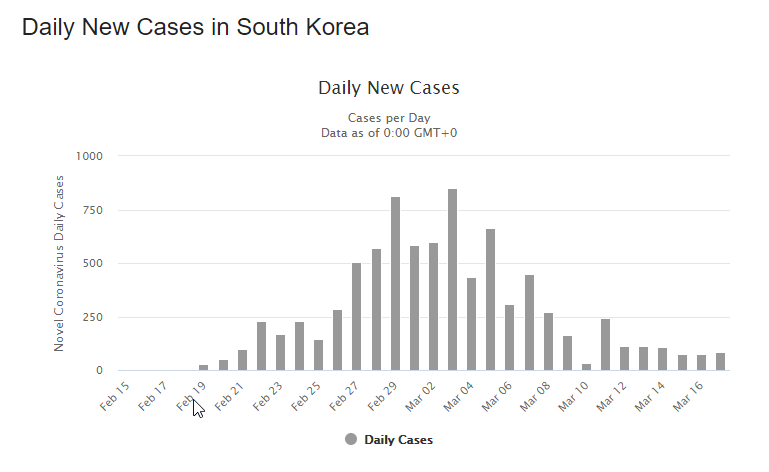 All of this data shows something very clearly: the virus can be brought under control. Plus, Taiwan and Singapore—two of the closest countries to China that you would think would be most affected by the virus—managed to control it very quickly and very early on. So, it’s not inevitable that the virus will spread uncontrollably. Even if it starts out that way, as in China and South Korea, it can be controlled.

The data from all of these countries also reveals that both globally and especially here in the U.S., this is a solvable problem. That is an important point—and one that we need to keep in mind as we move forward.

So, how do we control the outbreak? The simple answer is to keep the virus from spreading to new people. Viral spread is defined by how many people catch it off each carrier, known as R0 (pronounced R-naught). If that number is greater than one, where each carrier infects more than one other person, the virus spreads. If it is below one, the disease dies out. It really is that simple. Right now, that number seems to be about three for the coronavirus, in the absence of social restraints, which explains the rapid spread and the panicked headlines. Left to itself, the virus will indeed continue to spread. Fortunately, most countries and governments are no longer leaving it to its own devices.

How do we limit the spread and reduce R0? Keep people away from one another. This is the idea behind school shutdowns, restaurant and bar closures, and all of the other policy measures out there. If people are not together, they can’t spread or catch the virus. Simple in theory, and as noted above, we know it has worked in both China and South Korea.

We are also seeing signs it is working in Italy, where new cases look to be stabilizing as the lockdown enters its third week. Yes, the numbers are still way too high. But they have to stabilize before declining—and that is what is happening. 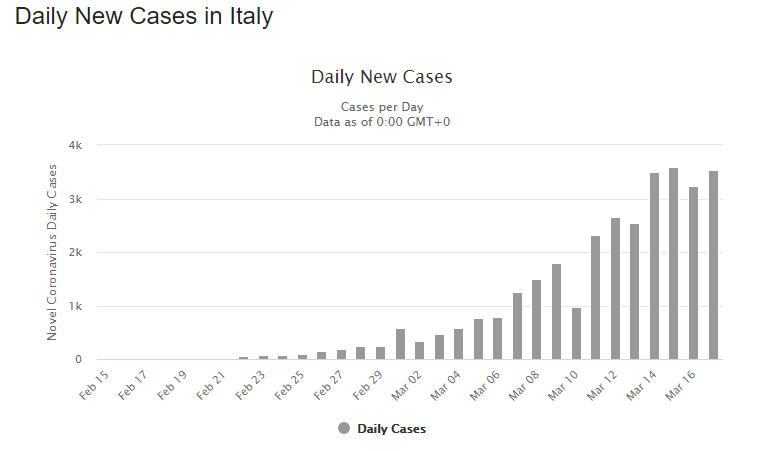 The lesson here is that the coronavirus can and has been stopped in many countries, including those with the most severe epidemics. To control the virus, it is necessary to push R0 down. We see it can be and has been pushed down in multiple countries.

What does this data mean for us here in the U.S.? The good news is that, starting a couple of days ago, we are taking the measures that work. The fast growth in virus cases that we've seen thus far has been because we had not yet imposed the restraints that limit viral spread. We are now implementing the policies that have been proven to work. Restrictions at the state level will certainly help, and the national emergency declared by President Trump puts those restrictions in bold.

Unfortunately, we are not past the point of maximum impact and certainly not past the point of maximum headlines. Not only will the improvements from the restrictive policies not show up in the data for weeks (as we saw in Italy), but the reported data may get worse. With increased testing, it will look like more and more new cases showing up. That doesn't necessarily mean that there are more new cases; it just means that all of a sudden we know about them. As testing gets better, and as we know more about how many cases there really are, things could look worse even as they're getting better. Expect to see this story in the headlines, and be prepared for it. Which brings us to the final question: how will we know when things are finally getting better?

Keep an eye on new cases

We’ll know when the chart below shows a decrease in new infections. Right now, the U.S. chart looks scary, but so did the charts for the other countries before they put the appropriate policies in place. Plus, there is reason to believe the actual results may be better than we saw in other countries. 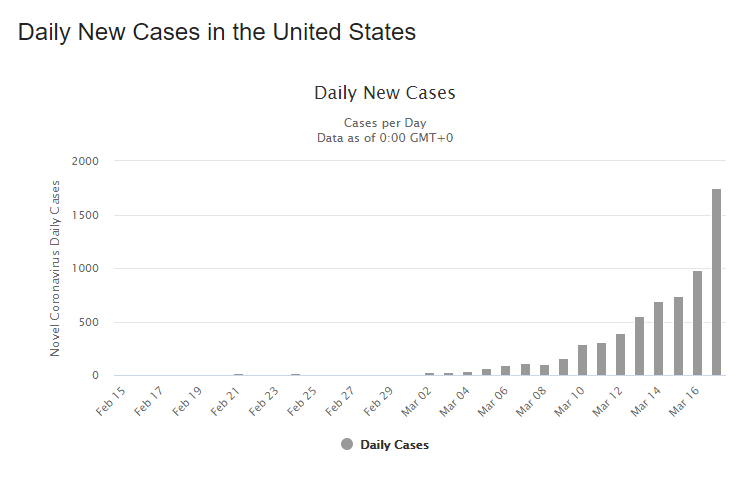 As I said, we are probably close to the point of peak actual infections, now that restrictive measures are in place for a large part of the population. But we don’t know that, and we don’t know when the curve will bend down. The first sign will be when the reported new cases first stabilize, then roll over, and then start to decline. Keep an eye on this chart.

We are not at that point yet. Now, we see disease growth combined with better reporting appearing to spike the case count. But if China, South Korea, and Italy are good guides, we should see that point in the next month. That will be when things are getting better, even if the headlines continue to get worse. Expect to see that, and understand that the underlying situation is likely improving, even as the headlines get worse.

On our way to solving the problem

We are already at or close to the maximum public perception of risk. When all of the professional sports seasons were cancelled, pretty much everybody in the country started to realize what was going on. With that, and with all the follow-up coverage, people know what the problem is, they know what to do, and by and large they are doing it. This awareness is what is needed to beat the virus. The public reaction has been a good sign because it has enabled governments to take the measures that they need to. We wouldn't have had a national emergency without that public perception of risk. We would not have had the restrictions that we're seeing right now, which will solve the problem over time, without that public perception of risk. The panic has been a key part of solving the problem. While we are not there yet, we are on the way.

Other reasons to be optimistic relate to the simple fact that the U.S. is a very spread out country. Most of the outbreaks have been in very concentrated populations, where people live on top of one another and have multiple exposures (e.g., daily public transit use). That describes China, Italy, and South Korea, as well as the major outbreaks in the U.S., such as New York, Seattle, and Boston (where I live). In less concentrated areas, we see much less spread. We still need to isolate to control, because we don’t want to see that spread start there, but we are in a much better position to do so.

This is the real takeaway for the pandemic itself: it is real, it is serious, and we need to react. The good news is that we are doing just that—and that will bring the virus under control. This situation is not the apocalypse, but rather another solvable and survivable challenge. That’s the good news.

Now we need to consider next steps, however, because there will certainly be economic damage. How much, and what that will mean, is what we will discuss tomorrow.

Until then, stay healthy!