June was another positive month for markets. The S&P 500 returned 1.99 percent, the Dow Jones Industrial Average (DJIA) gained 1.82 percent, and the Nasdaq Composite rose by 6.07 percent. On a quarterly basis, the Nasdaq led the way with a gain of 30.95 percent, while the DJIA gained 18.51 percent and the S&P increased by 20.54 percent.

These strong results came despite worsening fundamentals. According to Bloomberg Intelligence, as of June 26, the estimated earnings growth rate for the S&P 500 in the second quarter is –44.1 percent. The market rally suggests investors expect a continued recovery, however, and are willing to overlook a quarter or two of declines.

Fixed income markets had a solid month and quarter, driven by continued support from the Federal Reserve. The 10-year U.S. Treasury yield started the period at 0.62 percent and hit a high of 0.91 percent in early June before falling back to 0.66 percent at quarter-end. The Bloomberg Barclays U.S. Aggregate Bond Index rose by 0.63 percent during the month and 2.90 percent for the quarter.

High-yield fixed income also had a strong quarter. The Bloomberg Barclays U.S. Corporate High Yield Index gained 0.98 percent in June and 10.18 percent for the quarter. High-yield bond spreads ended the month largely unchanged, after falling notably in both April and May.

Despite the positive news in the markets, the public health data released during the month showed some setbacks. We finished the quarter with the highest level of active coronavirus cases in the U.S. on record, fueled by concentrated outbreaks in several states. The daily case growth rate remained under control at the national level, however.

Testing continued to improve in June, ending the month with a new daily high of roughly 650,000 tests, compared with roughly 400,000 at the end of May. Current testing levels are still not high enough to track and contain the disease on a national level, however.

The data released in June pointed to a faster-than-expected rebound in economic activity. May’s retail sales report was a highlight, with headline sales rising 17.7 percent. Personal spending rose by 8.2 percent.

The Conference Board Consumer Confidence Survey improved from 85.9 in May to 98.1 in June. This was the largest single-month increase for the index since 2011, as you can see in Figure 1. 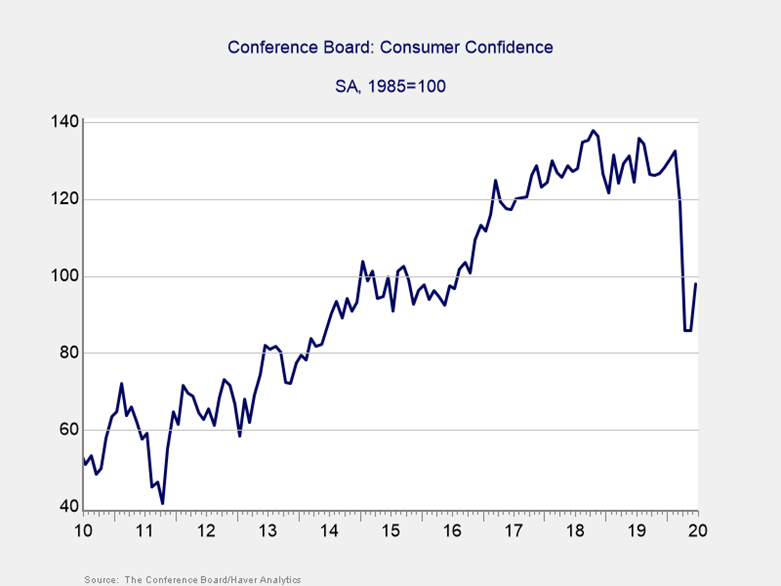 Although the positive economic news we received in June was encouraging, most of the data was backward looking. It should be noted that risks to the economic recovery and market rally are still out there. Given this uncertainty, a well-diversified portfolio that matches timelines and risk levels remains the best path forward for most investors; however, you should consult with your financial advisor if concerns remain.

All information according to Bloomberg, unless stated otherwise.

Disclosure: Certain sections of this commentary contain forward-looking statements based on our reasonable expectations, estimates, projections, and assumptions. Forward-looking statements are not guarantees of future performance and involve certain risks and uncertainties, which are difficult to predict. Past performance is not indicative of future results. Diversification does not assure a profit or protect against loss in declining markets. All indices are unmanaged and investors cannot invest directly into an index. The Dow Jones Industrial Average is a price-weighted average of 30 actively traded blue-chip stocks. The S&P 500 Index is a broad-based measurement of changes in stock market conditions based on the average performance of 500 widely held common stocks. The Nasdaq Composite Index measures the performance of all issues listed in the Nasdaq Stock Market, except for rights, warrants, units, and convertible debentures. The MSCI EAFE Index is a float-adjusted market capitalization index designed to measure developed market equity performance, excluding the U.S. and Canada. The MSCI Emerging Markets Index is a market capitalization-weighted index composed of companies representative of the market structure of 26 emerging market countries in Europe, Latin America, and the Pacific Basin. It excludes closed markets and those shares in otherwise free markets that are not purchasable by foreigners. The Bloomberg Barclays Aggregate Bond Index is an unmanaged market value-weighted index representing securities that are SEC-registered, taxable, and dollar-denominated. It covers the U.S. investment-grade fixed-rate bond market, with index components for a combination of the Bloomberg Barclays government and corporate securities, mortgage-backed pass-through securities, and asset-backed securities. The Bloomberg Barclays U.S. Corporate High Yield Index covers the USD-denominated, non-investment-grade, fixed-rate, taxable corporate bond market. Securities are classified as high-yield if the middle rating of Moody’s, Fitch, and S&P is Ba1/BB+/BB+ or below.